These wasps are relatively common in open, agricultural areas where they attack the caterpillars of a variety of pest moths. However, like so many parasitic insects ,unless you know how to find them they are unlikely to be noticed. Adults of ichneumonid wasps are known to feed on nectar from flowers, and this may be the most likely place they would be spotted by non-entomologists. These wasps are also well known as model insects for molecular studies of polydnaviruses, viruses that are injected along with parasitic wasp eggs into host larvae by ichneumonid and braconid parasitic wasps to regulate host physiology during development of wasp larvae. 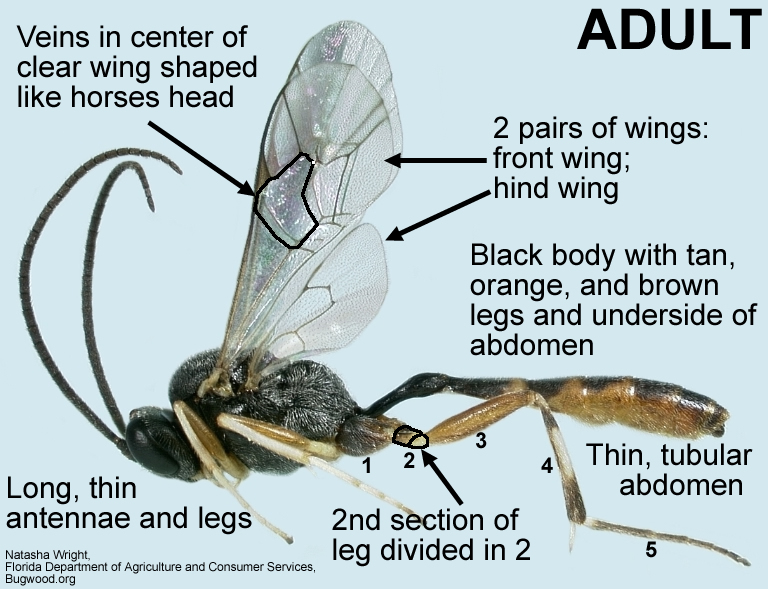 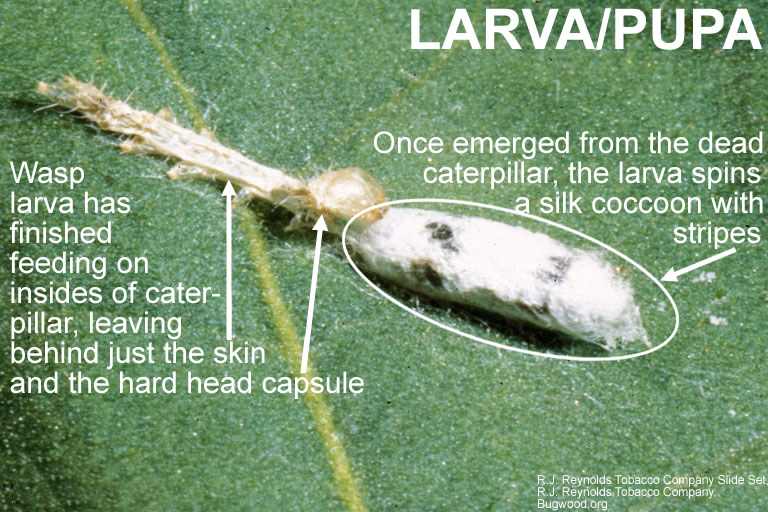 Medium sized wasps about 0.5 inch long. Like all Hymenoptera (bees, wasps, ants), each of two pairs of wings is held together by a row of tiny hooks. Like all wasps belonging to the family Ichneumonidae, they have veins in the front wings shaped like a horses head, and the second leg segment is divided. They have long antennae and legs and a thin body with a tubular abdomen. There are many species of wasps in the family Ichneumonidae, and the characteristics that are used to separate them are esoteric. However, if a wasp emerges from a fall armyworm or tobacco budworm caterpillar, and looks like the above photos, there’s a good chance it is C. sonorensis.

Because the grub-like larvae develop inside caterpillar hosts feeding on progressively more vital tissues, they cannot be seen. However, within a couple of weeks of parasitism (time dependent on temperature), larvae will chew through the caterpillars skin to emerge and spin a cocoon often beside the now dead caterpillar host. The white cocoons have two indistinct dark stripes, one at either end, that give them a ‘bird poop’-like appearance. This contrasts with cocoons produced by wasps in the family Braconidae, that have no stripes and are usually white (see example).

Campoletis sonorensis wasps are known to contribute to natural control of some important pest caterpillar populations, especially those of the fall armyworm and tobacco budworm. They are not sold commercially.

Native, throughout much of North America.